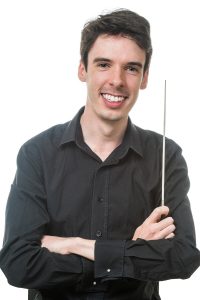 Joshua has been an active conductor, composer and educator since graduating from the Sydney Conservatorium of Music in 2015 where he studied with teachers including Carl Vine, John Lynch, Sandy Evans and Richard Cohn. During his time there, Joshua developed a keen interest in music of the 19th and 20th centuries as well as music written for the screen and stage. Furthermore, working with the skill and knowledge of fellow student musicians fostered a deep love for conducting nurtured by Dr Anthony Clarke and, as a result, Joshua co-founded and conducted the Canaria Scoring Orchestra while a student to record original, Australian film scores. He still maintains a working relationship with the Castle Hill Players, producing original, incidental music for one or more stage productions each year. Most recently, he founded and directs The FilmHarmonia Orchestra, who play concerts celebrating and promoting the artistic integrity of some of the world’s great film music. Other conducting engagements include serving as the conductor of the Macquarie University Symphony Orchestra, the Wellington Music Group, and invitations as a locum conductor for both the Strathfield Symphony Orchestra and IWCB (the latter of whom he normally plays with). As an educator, Joshua directs numerous school bands across Sydney in addition to tutoring many of the students on their instruments. Joshua is thrilled to be invited again to guest conduct IWCB this year.