Freemasons and the Great War 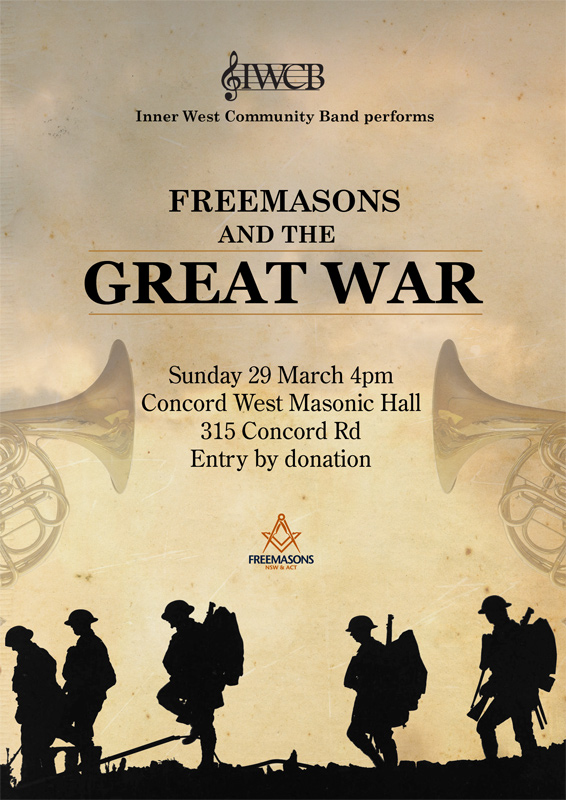 Commemorate the 100 year anniversary of the battle of Gallipoli in the First World War, with an afternoon of war and Freemason-themed music played by the Inner West Community Band.

The ‘Freemasons and the Great War’ concert on Sunday 29 March at 4pm in the Concord West Masonic Hall, will take you on a journey of remembrance and joy.

The march ‘Sabre and Spurs’ by John Philip Sousa, a Freemason, opens the concert with its upbeat and inspiring military march sounds. During the Great War era, Sousa was a prolific composer of marches to inspire the military, with ‘Sabre and Spurs’ being one of his finest.

Enjoy Masonic hymns such as ‘Abide With Me’ and ‘Auld Lang Syne’. Delight in how Masonic hymn ‘Eternal Father, Strong To Save’ is embedded in a new composition called ‘Journal For A Soldier’.

‘St Louis Blues’, which was performed by Masonic musicians such as Louis Armstrong and Count Basie, and composed in 1914 at the time of the Great War, provides a blues take on the theme.

“We are sure the audience will find it a magical and moving experience seeing and hearing these well-known themes and new compositions performed live,” said Danika Allars, musical director and co-founder of the Inner West Community Band.