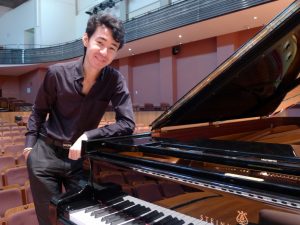 Australian Pianist Robbin Reza (22 years) recently completed a Bachelor of Performance with First Class Honours at the Sydney Conservatorium. After being awarded with the Bessie Cook Piano Scholarship, Robbin has been studying with Daniel Herscovitch since 2007.

In 2013, he performed the Australian Premiere of Elliot Carter’s Conversations (2010) as a soloist at the Sydney Conservatorium.

In October 2013, Robbin represented NSW as a finalist in the ABC Symphony Australia Young Performers Awards held in Melbourne.

In 2014 he received the Theme and Variations best overall pianist scholarship and the Irene Hope Gibson Award.

In 2015 he was the NSW finalist in the Sydney Eisteddfod Allison/Henderson Piano Scholarship and was the recipient of the Theme and Variations Foundation Scholarship.

Most recently, Robbin was a recipient of the Mendelssohn Scholarship which allowed him to participate in the 2016 Mendelssohn Akademie in Leipzig and was the winner of the 2016 Concerto Competition at the Sydney Conservatorium and will be performing Scriabin’s Piano concerto with the Conservatorium Symphony in 2017.